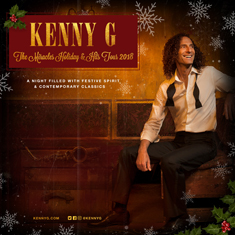 In a recording career that spans almost three decades and 23 albums, Grammy Award-winning saxophonist Kenny G has grafted elements of R&B, pop and Latin to a jazz foundation solidifying his reputation as the premiere artist in contemporary jazz. Since the early ‘80s, his combination of unparalleled instrumental chops and indelible melodies has resulted in sales of more than 75 million records worldwide and more than a dozen climbs to the top of Billboard’s contemporary jazz chart. On this highly-anticipated holiday tour Kenny G will perform some of his greatest hits, including songs from his 1994 smash album Miracles: The Holiday Album, which ranks as one of the most successful holiday albums ever – with over eight million copies sold.

The approximate run time is 90 minutes.

ShowTimes
Thu, December 6, 2018 at 7:30 PM
$76(Gold Circle)/$66/$56
Next ArticleALLENTOWN SYMPHONY ORCHESTRA: TO THE MOON AND BACK!
Previous ArticleTHE PRIESTS