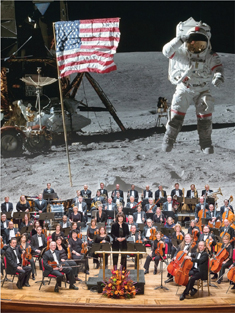 ALLENTOWN SYMPHONY ORCHESTRA: TO THE MOON AND BACK!

Diane Wittry, Music Director/Conductor
Celebrating the 50th Anniversary of the moon Landing with photos from NASA

Where were you on July 20, 1969, when Neil Armstrong and Buzz Aldrin took mankind’s first steps on the lunar surface? The Allentown Symphony Orchestra presents a concert commemorating the 50th Anniversary of the moon landing with original photos from NASA! Concert program will include: Debussy’s Clair de Lune, Beethoven’s Moonlight Sonata. Also music by John Williams: Star Wars, Holst’s The Planets: Mars, The Bringer of War, Theme from Horner’s Apollo 13 – and many more!

Come early for Todd Sullivan: 100 Billion Earths The Future of Space Science lecture in the Acopian Ballroom beginning at 5:30 PM. FREE with your Symphony Ticket.