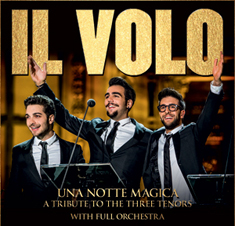 Notte Magica – A Tribute to the Three Tenors

Il Volo is the Italian pop vocal trio that has blended pop music and opera to colossal success around the world. Their latest concert, “Una Notte Magica – A Tribute to the Three Tenors,” is a celebration of the famed Three Tenors concert that featured Luciano Pavarotti, Placido Domingo, and Jose Carreras singing pop hits and well known operatic arias. The trio will be accompanied by a full orchestra.

The approximate run time is 1.5 hours with an intermission.