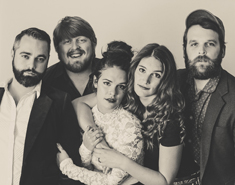 Forlorn Strangers is a Nashville based Americana quintet comprised of five songwriters (including the Lehigh Valley’s Jesse Thompson), each having their own distinct sounds & styles that blend into one cohesive voice. Their music is rooted in family harmonies & flavored with guitars, banjo, mandolin, fiddle, dobro, & foot stomping percussion. Since 2013, Forlorn Strangers has released two EPs (While the Grass Grows and American Magic Tricks) and has toured continuously across the United States, playing for an ever-increasing group of appreciative fans. Forlorn Strangers is gearing up to release their self-titled, debut full-length album recorded at John Prine’s Nashville studio, The Butcher Shoppe and produced by Grammy winner Phil Madeira.

The approximate run time is 120 minutes.