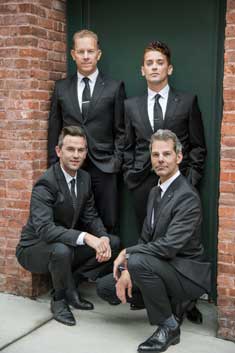 Stars of the Original Cast of Jersey Boys
themidtownmen.com

The Midtown Men Tenth Anniversary Tour reunites stars from the Original Broadway Cast of the smash hit musical, Jersey Boys. Launched in 2010 from their three year rocket ride together bringing to life the sound story of Frankie Valli and The Four Seasons, Broadway’s breakout vocal sensation is widely celebrated for their signature renditions of the iconic hits of the 1960s. Highlighted with their own high octane arrangements, slick moves and one of a kind repartee, their all new concert features even more iconic ‘60s music from The Beatles, The Beach Boys, Chicago, Elvis, The Temptations, The Four Seasons and more!

Not A Performance Of, Not Affiliated With the Show Jersey Boys. The approximate run time is 110 minutes with intermission.