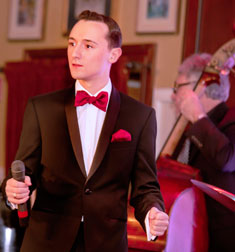 Charlie Romo is a native New Yorker and grew up in a community and family with strong character which has reinforced in him a style that has served him well on stage. Inspired by his favorite interpreters of classic American popular songs (Bobby Darin, Frank Sinatra, Vic Damone, Ray Charles, Tony Bennett, Ella Fitzgerald, Dean Martin, Judy Garland, Sammy Davis Jr., Michael Bublé, etc.), Romo has developed an avid passion for, and a unique interpretation of recognizable standards of jazz and the Great American Songbook. His goal is to “carry the torch” by reviving the music and style of previous eras in a dynamic and refreshing way. Romo has made a name for himself in the jazz/cabaret circuit by working with top-notch musicians, and from his award-winning performances. He often performs in major cities around the country, including New York City, Las Vegas, Los Angeles, and Orlando. Last December, Romo made his Lincoln Center debut, where he co-headlined the annual Christmas Spectacular at David Geffen Hall. He is honored to be the youngest member ever inducted into the legendary Friars Club in New York City. An original, contemporary crooner, Romo performs classic hits as if they were brand new. His high energy stage performances harken back to the greats — but ultimately, his performances set their own standard of excellence. This performance is sure to be special, as Romo brings his quartet and guests vocalists to The State Theatre for a one night only Valentine’s show filled with love songs, romantic ballads, and classic hits for what is sure to be a memorable evening.