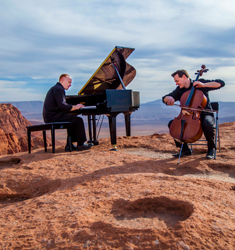 Hailing from Utah, The Piano Guys are four dads who became an Internet sensation by way of their immensely successful series of strikingly original self-made music videos. They’ve made over 50 since early 2011, including their hit video, an innovative multi-handed version of One Direction’s “What Makes You Beautiful” and a gorgeous reinvention of the hit song “Let It Go” from Disney’s Frozen. It’s the Guys’ highly original blend of classical music with pop that has really been the cause of an Internet phenomenon and has led to over 500 million YouTube views. It is their endearing personalities along with their obvious will to inspire young and old, which keeps the fans coming back for more.