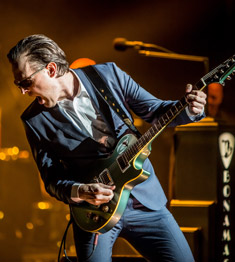 Hailed worldwide as one of the greatest guitar players of his generation, Joe Bonamassa has almost single-handedly redefined the blues-rock genre and brought it into the mainstream. Backed by a stellar band of legendary musicians including Anton Fig (drums), Michael Rhodes (bass), Reese Wynans (piano, Hammond organ), to bring a whole new life to the show which will feature new songs alongside career-spanning favorites. By exceeding his own vertiginously high artistic goals, Bonamassa has shattered all expectations with this record and has reached new audiences – no mean feat when you continue his astonishing track record of hits, which now includes 16 #1 Billboard Blues Albums (more than any other artist in history) and in 2014, the guitarist received his first-ever Grammy nomination (for Best Blues Album) for the album Seesaw, his second collaboration with blues singing star Beth Hart. “They’re calling him the future of blues, but they’re wrong – Joe Bonamassa is the present; so fresh and of his time that he almost defines it.” – Classic Rock Magazine

Download a Free Song from Joe Bonamassa at www.jbonamassa.com/freemp3

This is not a State Theatre produced show. Member Benefits & Gift Cards do not apply.