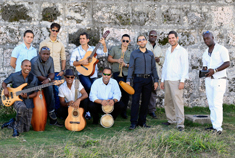 THE HAVANA CUBA ALL STARS

Debut tour of Cuba’s greatest musicians in the United States and Canada! The joy of the Caribbean pulses through the air as Cuba’s most prominent musicians share their rich musical heritage, from the Rumba to the Cha-Cha-Cha to the Habanera. This exciting band brings an authentic Cuban experience, with rhythmic drums and castanets, wailing trumpets, and masterful acoustic guitar. Devoted to presenting the wide tapestry that exists in Cuban music — from Latin dance to soulful ballads — this concert presents the great musical traditions of the Cuban people. “The Asere Friendship Tour” is The Havana Cuba All-Stars’ first-ever U.S. tour and celebrates the new open friendship between the United States and Cuba.