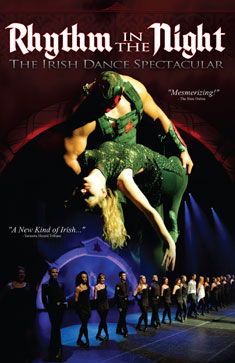 RHYTHM IN THE NIGHT

Experience the new Irish dance phenomenon that is sweeping the country, Rhythm in the Night, The Irish Dance Spectacular! It’s what critics are calling “A New Kind of Irish” and the Slate Online describes as “Mesmerizing!”

Referred to as ‘Sensational’ by the Akron Legal News, the 110-minute phenomenon, Rhythm in the Night, The Irish Dance Spectacular, reimagines traditional Irish dance to take the audience on an exciting journey of a fallen hero and his rise to redemption for an unforgettable experience the entire family will enjoy! Led by former Michael Flatley’s Lord of the Dance lead dancer, Justin Boros, the accomplished cast featuring 20 of the world’s most skilled Irish dancers and musicians brings the inspiring story of love and salvation to life against a backdrop of ancient ruins that transports the audience to another time and place where the imagination unfolds. The world-renowned Irish dance troupe performs lighting fast hard shoe rhythms and graceful soft shoe jigs to an epic orchestral soundtrack, while state of the art lighting ignites the stage into an explosive display of dance and music. Strength, agility and precision formulate the fastpaced and breath-taking experience on stage as the cast performs to the heartpounding and fluid symphonic music that has enthralled audiences all across North America!

Darkness has fallen across the land. Evil has taken the unsuspecting kingdom by surprise. Deception now reigns and temptation has rivaled the strongest of wills. The evil sorceress Azura has trapped the legendary hero Balor under her spell to command her legion of relentless henchmen. Unable to free himself, hope remains lost for all those in the kingdom…until now.

In a final attempt to rescue their leader, the people have called upon Balor’s loving companion Aisling along with his younger brother Solas and their knights to release Balor from Azura’s control and restore peace to the divided kingdom. As the storm rolls in and the lightning crashes, will redemption rise from the shadows or will evil prevail in the legend that has come to be known as Rhythm in the Night.

Rhythm in the Night, The Irish Dance Spectacular is an epic journey derived from a tale of good versus evil with a storyline that will capture the imagination of everyone in the family and transport them to a mystical time and place of heroes and redemption. The battle scenes transcend the struggle of dark versus light as lightning fast rhythms and a thunderous world-class dance troupe display Irish dance like never before seen. Adding to the drama and excitement of the production, Rhythm in the Night features an original soundtrack that delivers an orchestral atmosphere of epic proportions. Rhythm In the Night turns an age-old art form into an exciting Irish dance spectacular the whole family can enjoy!

ShowTimes
Thu, March 24, 2016 at 7:30 PM
$30/$25
Next ArticleSING ALONG WITH THE MUPPET MOVIE
Previous ArticleRICKY NELSON REMEMBERED