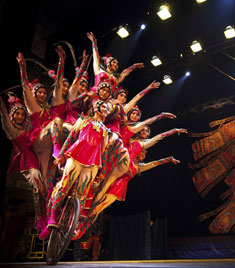 National Circus & Acrobats of the People's Republic of China

Direct from Beijing, The National Circus and Acrobats of the People’s Republic of China was founded in 1953, making it one of the longest running and most distinguished circus troupes in China. The troupe is especially acclaimed in China because of the unique acts in their program such as Great Teeterboard, Grand Flying Trapeze, Group Contortion, Straw Hats Juggling, Girls’ Balance With Bowls and many other outstanding acts.
The Company is credited with changing the concept of the “animal circus” to a new style of “non-animal circus” which influenced the then pioneers of “Cirque du Soleil”

The approximate runtime is 2 hours with an intermission.