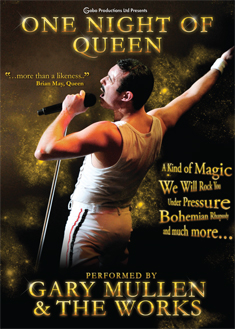 ONE NIGHT OF QUEEN

Since May 2002, Gary Mullen and the Works have performed throughout the UK, USA, Europe, South Africa and New Zealand to sell-out audiences. They have twice rocked the prestigious BBC Proms in the Park, in front of a very enthusiastic crowd of 40,000. Now in the 12th years of touring the US, One Night of Queen is a spectacular live concert, recreating the look, sound, pomp and showmanship of arguably the greatest rock band of all time. This show will ROCK you!