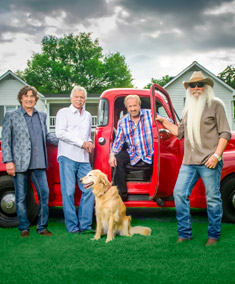 Their’s is one of the most distinctive and recognizable sounds in the music industry. The four-part harmonies and upbeat songs of The Oak Ridge Boys have spawned dozens of Country hits and a Number One Pop smash, earned them Grammy, Dove, CMA, and ACM awards and garnered a host of other industry and fan accolades. Every time they step before an audience, the Oaks bring four decades of charted singles, and 50 years of tradition, to a stage show widely acknowledged as among the most exciting anywhere. The Oaks were announced as the 2015 Modern Era Inductees into the Country Music Hall of Fame, with formal induction by Kenny Rogers on October 25, 2015 in Nashville, Tennessee.