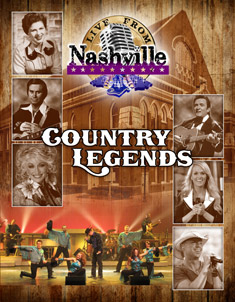 Live From Nashville features an outstanding troupe of genuine country singers and musicians with their brand new stage show, COUNTRY LEGENDS! This sequel follows in the boot prints of the highly successful original Live From Nashville tour, taking on a 75-year chronological journey of Nashville’s Country Legends. The show begins with the music of the original pioneers like Patsy Cline, Hank Williams and Johnny Cash, through the Golden Age of Country with artists like George Jones, Tammy Wynette, Conway Twitty and Loretta Lynn and then on to new legends such as Garth Brooks Reba, Clint, Shania, Brooks and Dunn and even modern legends-in-waiting like Carrie, Luke, Taylor and Blake.