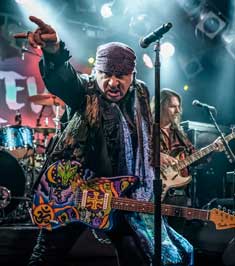 LITTLE STEVEN & THE DISCIPLES OF SOUL

Steven Van Zandt is a member of the New Jersey Hall of Fame, Rock and Roll Hall of Fame, and is recognized internationally as one of the world’s foremost authorities on both Contemporary and Traditional Rock and Roll. After helping create the “Jersey Shore” sound with the Asbury Jukes he became a founding member of Bruce Springsteen’s E Street Band, and went on to become a successful solo artist in his own right recording and performing solo with his band Little Steven and the Disciples of Soul. In 2017 he released his first new album in over 15 years returning to his Rhythm and Blues roots entitled “Soulfire” which Rolling Stone named one of its “Best Albums of 2017.” He has recently released “Soulfire LIVE!” a 3 disc CD box set with a 7 Vinyl box set and 2 disc Blu-Ray to be released this February, recorded live during the “Soulfire Tour,” his first solo tour in over 20 years.

Valid for remaining Orchestra rows L-ZZ and Loge Area.
Now thru 10:00 PM on July 25th: Code SOUL
Offer available while supplies last.
Not valid on previous purchases or for other performances. Fees Apply.

This is an Outside Promoter event. State Theatre member benefits do not apply.

As per artist management, all online purchases include a CD bundle added per ticket.