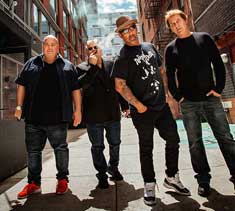 Get ready for a night jam-packed with laughs with the stars of comedy: Ron Bennington, Jim Florentine, Robert Kelly & Rich Vos.

Ron Bennington is a New York based radio talk show host who broadcasts internationally on SiriusXM satellite radio. In addition to hosting Bennington, through his two interview shows, “Ron Bennington Interviews” and “Unmasked,” he conducts incisive critically acclaimed interviews about artistry, creativity and craft with artists and personalities who are renown in their fields.

Jim Florentine is a stand-up comedian, TV host, actor, podcaster and voice artist. He is best known for co-hosting VH1 Classic’s heavy metal talk show series “That Metal Show” that ran from 2008-2015. Jim Florentine is also known for his work on Comedy Central’s show Crank Yankers where he performed the voice of Special Ed and Bobby Fletcher. Recently, Jim Florentine has appeared in the hit movie Trainwreck as the one night stand guy and on the critically acclaimed TV series Inside Amy Schumer and Louie on FX.

Robert Kelly’s comedy is deeply rooted his own life and relationships which makes it honest, abrasively funny, yet refreshingly vulnerable. He has been winning over audiences for years touring clubs, colleges and theaters, including repeat performances at Montreal’s Just For Laughs Festival.

Rich Vos: The Myth, The Man, The Legend. Raised in New Jersey, Rich Vos is a no-holds-barred performer who destroys in comedy clubs around the country. A comedian’s comedian, he can be heard regularly on Opie and Jimmy and as a guest on the most popular podcasts including WTF with Marc Maron and Rogan. Vos is a seasoned comedian with decades of experience. He is highly respected amongst the comedy community, and beloved by audiences around the globe.

This is an Outisde Promoter event. State Theatre member benefits do not apply.