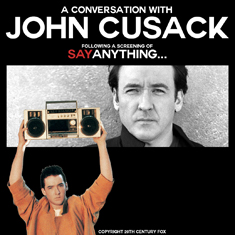 A CONVERSATION WITH JOHN CUSACK AFTER A SCREENING OF SAY ANYTHING

The 1989 comedy/drama “Say Anything” brought popular culture the love story of Lloyd Dobler (actor John Cusack) and Diane Court (actress Ione Skye). An eternal optimist seeks the heart of a “brain trapped in the body of a game show hostess.” Ranked by Entertainment Weekly as one of the greatest modern movie romances (and #11 on the list of 50 best high-school movies), “Say Anything” made a star out of John Cusack who went on to success in multiple films including “High Fidelity,” “Grosse Point Blank,” and “Being John Malkovich,” among others. Now, join John Cusack for a screening of “Say Anything” followed by a LIVE conversation regarding his career and the making of “Say Anything.” Roger Ebert called the movie “one of the best films of the year” when it was released. Fans will now get the opportunity to experience a moderated discussion, with John answering audience questions as well.

A limited number of VIP gold circle seats will be available that include a post-show photo op with John. No Autographs.

This is an Outside Promoter event. Member Benefits do not apply. Ticket prices subject to change. There is a limit of 8 tickets per patron for this event.