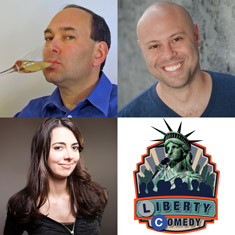 Come see comedians from The Late Show with Stephen Colbert at the State Theatre! Known for their elite brand of clever comedy, you’ve heard their brilliant comedic voices on late-night TV and Comedy Central. Now come see them live on stage! Liberty Comedy presents a hilarious comedy show is as perfect for entertaining your clients as for a casual night out with friends.

The approximate run time is 1 hour 45 minutes with an intermission.