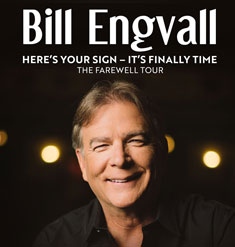 Bill Engvall is a Grammy nominated, multi-platinum selling recording artist and one of the top comedians in the country. Bill can regularly be seen in a recurring role on the hit FOX sitcom Last Man Standing playing Reverend Paul. Bill’s first album, Here’s Your Sign, is certified platinum and held the #1 position on the Billboard Comedy Chart for 15 straight weeks. His second album, Dorkfish, also debuted at #1 on Billboard’s Comedy Chart, as did his subsequent comedy albums. He was recently awarded “Casino Comedian” of the year at the 2019 Casino Entertainment Awards in Las Vegas, NV.