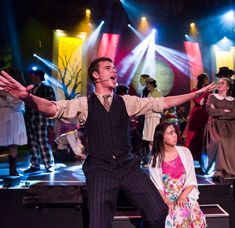 Can’t get a ticket to the FREDDYs? Catch all the performances live during the television dress rehearsal, including the Opening and Closing numbers, Lead Actor & Actress Medleys and Overall Musical Nominees! Benefits the FREDDY Awards Program

**Students must be accompanied by an adult, children under 8 not permitted. This is a television rehearsal for the FREDDY© Awards broadcast. Performances subject to time restraints and changes necessary for the broadcast. No use of Camera, video or electronic recording devices permitted – may interfere with production radio frequency.