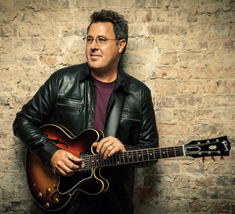 One of the most popular and most recorded singers of the past quarter-century, superstar Vince Gill has become the measure of excellence in country music. Gill became just the second recording artist in history to receive the Irving Waugh Award of Excellence -the other being awarded to Johnny Cash – and also honored for his prolific songwriting career with the 2014 BMI Icon Award. He has won 18 more CMA honors, including Song of the Year four times – making him the most-awarded artist in that category in CMA history. The Academy of Country Music has handed Gill 8 awards, including their prestigious “The Home Depot Humanitarian Award” and the “Career Achievement Award.” Since 1990, Gill has received 20 GRAMMY Awards and has sold more than 26 million albums. His latest album Down To My Last Bad Habit was released in February. Vince Gill was inducted into the Country Music Hall of Fame in 2007.

The approximate run time is 2 hours.