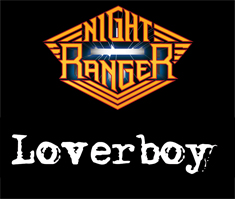 Rocking into its 35th year, NIGHT RANGER has earned widespread acclaim, multi-platinum and gold album status fueled by an impressive string of legendary hits such as “Sister Christian”, “Don’t Tell Me You Love Me”, “When You Close Your Eyes” and “(You Can Still) Rock In America.”

With their trademark red leather pants, bandannas, big rock sound and high-energy live shows, LOVERBOY has sold more than 10 million albums and released a string of hits including the anthem “Working for the Weekend,” and arena rock staples like “Lovin’ Every Minute of It,” “Hot Girls in Love,” “The Kid is Hot Tonite,” and “Turn Me Loose.”

Sponsored by: Victaulic and 99.9 The Hawk

The approximate run time 2 hours 45 minutes with an intermission.